As part of my first Inktober (2017), I put pen to paper and found myself illustrating images and scenes of women from the island, Tamil and Muslim women in particular. I had just returned from living and working there for a year. Through these sketches I found myself connected to that life I was briefly a part of and continue to want to bring attention to.

When participating in politics isn’t a choice. Calling attention to the current and ongoing protests in the North-East of Sri Lanka. Specifically protesting the detainment of Tamil political prisoners who have been held for years without charge as well as the ongoing protests of the Families of the Disappeared waiting for the government to make good on their pledged commitments which include releasing the name list of those forcefully disappeared and/or held in secret detention centers.

Remembering a significant event in our shared histories, 27 years on, when tens of thousands of Muslim families were forcibly evicted from their homes in the northern province by the LTTE. This mass expulsion weighs heavy. Leading up to this moment many atrocities and political maneuvering created a terrible friction between communities. Many of these families are living in IDP camps still to this day. Our histories are complex, intertwined and full of so much tragedy, but that shouldn’t stop us from acknowledging these truths.

For the #internationaldayofthegirl it only felt right to pay tribute to the countless young women in #srilanka who endure so much to gain so little. Despite all the bullshit, they continue on, remaining strong whether they want to or not because they have to, because it’s survival – so watch your back. 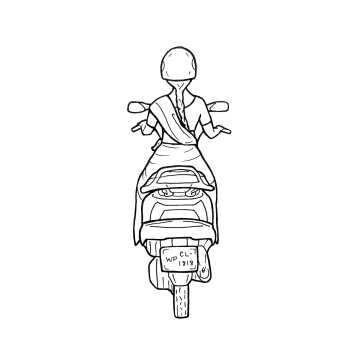 That sari life. One of my favourite parts of my morning commute in Colombo was finding one of my fellow ladies on her scooter or her bike! 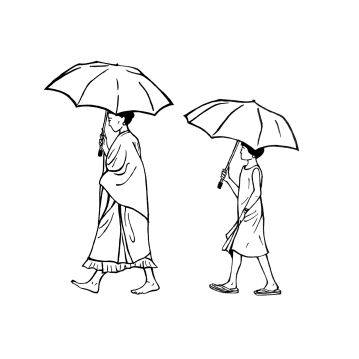 Hold the umbrella – rain and shine!

Inspired by a beautiful photo taken by @mjayagoda in Trincomalee. Just had to draw it. I’d like to think they are sisters with their cute கால் சங்கிலி